It's good for you - in lots of ways. These days I'm partial to the white rice; though I don't have it too often, maybe once a week.

But what I really want to talk about is brown rice.

Let me tell you a little tale...

The other night, long after my kiddo was supposed to be in bed, she bops downstairs to my room and says, "Mommy, I don't have any volume on my phone."

(She was attempting to watch a show until she fell asleep and it appeared that her headphones weren't working.)

Nope, no volume. Gary played with it. We called the phone. He played some more. No volume, in any way, shape, or form on Maggie's phone.

...and then she spilled the beans.

Apparently, earlier in the day, she had dropped her phone (that was ORIGINALLY ONLY SUPPOSED to BE for EMERGENCIES) into the toilet. She retrieved it immediately, dried it off, and then promptly forgot that it had gone for a swim.

Fast forward to this late night and once told, the tears started flowing.

...not getting a new phone, I can tell you that.

So, while this whole weepy mess was going on, Gary was on his phone, looking up our options.

Enter the brown rice. It was all we had, probably about two years old by now, since we aren't eating it currently in our diet. Brown rice in a little jug, just waiting to be thrown out.

I lumbered (yes, I did) down the stairs and retrieved said rice. I have never heard of this rice/iPhone trick actually working and truly was skeptical.

Even so, in went the phone, for 48 hours. The good part was that everything seemed to be working with the phone EXCEPT the volume. The water hadn't done too much damage, thank goodness. But we would see.

Two (very) long days later, at bedtime once again, Maggie asked if we could check the phone. I told her no, not till today (if 48 hours was good, lets do 60, right?).

But as G and I watched some TV, we decided, heck, let's just see...

It worked. As if taking that chilly dip in the toilet was but a fantasy (weird, but who knows what iPhones fantasize about?).

WOW. Mom is impressed. Maggie is thrilled. Gary is further vindicated that (i stuff) is AWESOME.

And we have a new use for our brown rice. 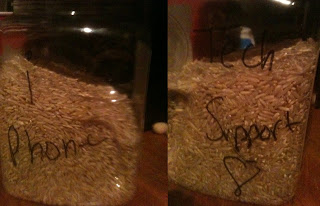 So, whether you prefer white or brown rice, if you have a smart phone, I would consider keeping a bit of both on hand, just in case. This kind of 24 hour iPhone tech support is second to none.

Remember, if you want me to track your miles for August, just shoot me a note and I will add you to the blog. If you are here already and I've got your numbers wrong, just shoot me...no, no, just let me know and I'll change it. I'm good with that. Cheers!
Posted by San at 10:33 AM No comments: